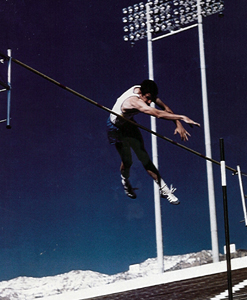 I am a former pole vaulter at Brigham Young University. In 1971 I set the Utah High School state record in the pole vault. In 1977, after serving a mission and gradually getting better and better at pole vaulting, I set a new BYU school record of 17 feet 9 inches. I went on to win the indoor and outdoor WAC Championships that same year.

In January of 1977, I was accepted into dental school at Georgetown University’s School of Dentistry. I knew that this is what my Heavenly Father wanted me to do with my life. I knew because I had prayed about it and felt the peace in my mind and heart that this is what I should do.

I have had many experiences throughout my life that have given me confidence that my prayers are answered. Once when I was eleven I got lost in the high Uinta’s (a secluded mountain range in north eastern Utah). After looking around and trying to find my group I was with, I concluded that all I could think to do was pray. I knelt down under a small pine tree and poured out my heart to the only being that could help me. I had been crying but after praying I felt confident that I would be lead. I started running the opposite way I had been going. As a group we had left the trail earlier, making a beeline to a campsite. As I ran I came upon a trail. I ran along that trail and watched it split three times. It was as if I knew where I was going but I had never been there before. I soon ran into camp where they were putting up tents and trying to find the group I had been with earlier. I know prayers are answered.

Soon after beginning dental school I received a letter inviting me to apply to train in Colorado for the 1980 Olympics. I had a decision to make. I spoke with the dental school Dean, he said he would let me off for two years to train and then let me back in. My wife and I spoke to many people to get their feelings. Most said we ought to go for it. Our parents were a little hesitant. We fasted and prayed to know the Lord’s will. We felt, after praying, we should not drop out of school. I didn’t drop out and then two years later the USA boycotted the 1980 Olympics. Once again, the Lord heard and answered my prayers when I could not see the way.

I know that God loves us and is interested in our growth and development. He will lead us along as long as we continue to follow by taking action. I know that he teaches us through living prophets today just as he did in times past. I know that the Book of Mormon really is an ancient record written by prophets for our day. I also know that anyone can find out that it is true by reading the book and praying intently for knowledge from God.